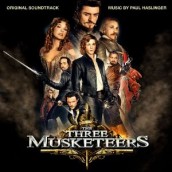 Paul Haslinger rocks with Dumas, by way of Paul W.S.

Whether you’re a composer doing a new take on pirates from the Caribbean or England’s most famous detective, it seems impossible now to play it straight for movies determined to hip up the look, and sound of historically iconic characters. Hence, a plethora of soundtracks that apply the incongruities of electric guitar-topped orchestras and satirical ethnic stylings to accompany multiplex costume spectaculars.

So make no mistake that Paul Haslinger’s latest iteration of Alexandre Dumas’ swashbucklers is going to give you the gloriously traditional symphonic strains that Herbert Stothart applied to the 1948 version of THE THREE MUSKETEERS, let alone the relatively straight-corseted musical approaches that Michel Legrand and Michael Kamen donned for the heroes’ 1973 and 1993 incarnations. You’d also be correct for expecting Haslinger to indulge in the entertaining, enfant terrible excess that also marks the delirious flair of filmmaking comrade Paul W.S. Anderson, who loads his MUSKETEERS up with ninja-like swordplay and the biggest damn aerial gunship seen since MASTER OF THE WORLD.

While it would be less than appropriate for Haslinger to apply the grinding metal that he gave to Anderson’s revamped DEATH RACE (let alone the percussive action scoring the composer’s been keeping himself so busy with), there’s ample rock and roll energy at loose in 17th century France, not to mention Spaghetti Western guitar stylings, tangos and distorted violins that make this entertaining album all for one, and one for all with its past scoring precedents. Yet Haslinger thankfully makes it a point to mix his cannon-firing fusion of strings and samples with an old-school approach. It’s a bad boy MUSKETEER score that doesn’t so much disregard the past Hollywood sound of Dumas’ royal court as much as it enjoys thrashing about the elegant place, providing thematic sweep, and just a bit of romance to give some old-school melodic shape to these MUSKETEERS bombastically fun musical anachronisms.