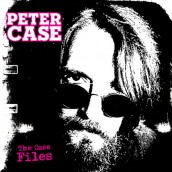 The former Plimsouls frontman delivers a satisfying set of demos, outtakes and other rarities from his solo career

It’s hard to review a compilation of demos, outtakes, live tracks and other rarities from a particular artist, because often times that material was never intended for consumer release.

Yet, when a solo artist reaches three decades mark, it is time to start digging into the archives for the die-hard fans and Peter Case has done that with THE CASE FILES.

While his material from the days as frontman of the short-lived 1980s rock outfit The Plimsouls was angst filled rock and roll the entire way, Case has spent the majority of his solo career focusing more on the blues and roots-based music.

It’s been incredible solo ride and the 12 tracks here cover the gamut of styles and experimentations.

“(Give Me) One More Mile” is a nice kick-off, a strong bluesy track, then the disc detours into the quirky live track “Let’s Turn This Thing Around”. “Anything (Closing Credits)” is the closest thing to the Plimsouls and it should since it features that and the Plimsouls’s Eddie Munoz.

Case takes on the bluesy Rolling Stones track “Good Times, Bad Times” with its stripped down feel. It’s a great cover and is a great showcase for Case’s trademark rasp.

Both “Kokomo Prayer Vigil” and “The Ballad of the Minimum Wage” are spoken word working class tracks in the Bob Dylan vein,

A stand-out is the stripped down demo of “Steel Strings No. 1” off of Case’s 1986 self-titled debut solo release. T. Bone Burnett accompanies him on the track (he also co-produced that release).

Perhaps the biggest find here is “Trusted Friend” which Case explains is a long lost track in between the Plimsouls and his solo career. I’ve always felt the Plimsouls were one of the most underrated bands of the early ‘80s with “A Million Miles Away,” Everywhere At Once” and the perfect “Oldest Story in the World” proving what a powerfully moving and great rock band they were. “Trusted Friend” has that Plimsouls vigor, albeit acoustically stripped down, and it’s great that Case was able to uncover it and debut it here.

THE CASE FILES is not a perfect album. And since it is essentially a bunch of odds and ends, some tracks are stronger than others, but it’s a road map of where Case has been and a wonderful bookend to his great 2010 album WIG!