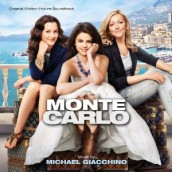 For as impressively big as Michael Giacchino can get, it’s often his small, unsung scores that are just as impressive. MONTE CARLO tween chick-aimed romance fits the bill nicely indeed.

As opposed to imagining three young women finding their Prince Charmings in a jet set fairy tale kingdom, Giacchino’s alternately delicate lyricism and jazzily prancing rhythms might make you thinking you’re hearing that long-awaited RATATOUILLE sequel wherein the rodent Remy falls in love. It’s a measure of how much Mancini-esque caviar also appears here, with a more-than-healthy seasoning of Burt Bacharach to boot.

You’ll definitely know your way to San Tropez from Giacchino’s wonderful, song-like homage to these masters of lush pop elegance, composers who knew that luxurious melodies and bouncily sophisticated comedy were the quickest ways to win the heart of any vacationing Ingénue. Lovestruck piano and guitar chords, French accordions, brassy flamencos and the big band chases of the young and beautiful abound through this musical getaway of the rich and famous, stylings which of course wouldn’t be complete without just a bit of spy jazz, especially knowing Giacchino’s proclivities. MONTE CARLO ranks as one of Giacchino’s most pleasant and listenable scores in a cannon already full of them, a soundtrack whose melodic effervescence wonderfully hearkens back to a comedy scoring era when class was king, as done with an energy that far less knowing watchers of its CW and Disney Channel heroines will also find themselves swooning to.

Click on link: To buy the MONTE CARLO soundtrack