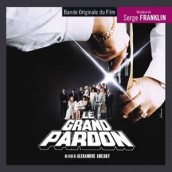 Serge Franklin does the Godfather Hora

As the French label Music Box Records continues to release Gallic scores that are intriguingly foreign to our ears, certainly one of their most oddball, and fun soundtracks yet accompanies the 1982 crime epic LE GRAND PARDON, one that still remains unreleased in America (even if its sequel took place there).

That you might feel like doing the disco Horah will quickly clue you in that LE GRAND PARDON’s mob family is of the Jewish persuasion. Serge Franklin’s energetically versatile score puts his theme through all of the Hebraic paces from solo piano to violin and rhythmic suspense. Franklin even has the chutzpah to go from a Shofar to funk energy. And where an accordion certainly links this crime family with the music of the Corleones, Martin’s GODFATHER-meets-gefilte vibe just as quickly goes to the sound of Spaghetti westerns with the inclusion of a guitar and fateful percussion. Add swinging jazz source and va-voom Bossa Nova, and you have a thoroughly entertaining French crime score that needs no pardon for being meshuga.