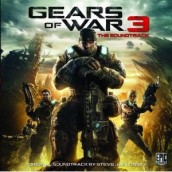 After doing an impressive tour of musical duty for Delta Squad, Steve Jablonsky suits up again for the COG squad’s ultimate battle against the seemingly unstoppable Locust horde for the GEARS OF WAR 3 soundtrack.

As this brotherhood of war lays waste to the non-human residents of the planet Sera, Jablonsky blasts out huge kill zones of furious percussion to catch every drop of GEARS’ testosterone overload. It’s a rough, raw sound that’s different from the sleeker action workout Jablonsky gave to the bigscreen Autobots this summer, a more rugged symphonic and sampled excitement that’s in synch with flesh and blood videogame heroes.

Yet what always links Jablonsky’s action stylings together is a memorable, valiant theme, a force of good that provides the glue for GEARS OF WAR 3, while also allowing its numerous action cues to function as their own, ever-amping mini-suites. Yet there’s also impactful emotion to go along with soldiers, with a full-on chorus finally joining in to give biblical impact to Delta Squad’s last appearance. Jablonsky’s GEARS delivers on the composer’s gung-ho trademark, but does so with heart, even as its characters are blasting alien ones all over your Xbox.

Click on link: To buy theGEARS OF WAR 3 soundtrack