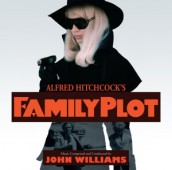 John Williams meets The Master of Suspense with this excellent score

In his 50-year plus career, Alfred Hitchcock had his macabre way with every top composer from Miklos Rozsa to Dmitri Tiomkin (not to mention Bernard Herrmann). So it seemed fitting that he’d go out with a bang by using John Williams, whose suspenseful career was on the fast track with the just-released JAWS. Instead of turning to the knife-slashing suspense one would expect Hitch to sum up his repertoire with, the director went for far more light-hearted fare about a sleazy psychic and her pursuers, taking Williams down a deliciously twisted road of dark comedy that would serve as a warm-up to the musical black magic of his scores to THE WITCHES OF EASTWICK and the various HARRY POTTER films.

Where he’d latter pay full-on tribute to Bernard Herrmann’s Hitch work in THE FURY, 1976’s FAMILY PLOT is all tell-tale Williams, from its typically memorable main theme to lush symphonic stylings. The composer makes sure all the musical accoutrements of a walk-in psychic shop are on hand, with a ghostly female chorus, Baroque harpsichords, dark pianos and some delicious 70’s era synth eeriness to point out its daffy clairvoyant. Yet for all of its faux supernatural fun, FAMILY PLOT has an equal amount of truly sinister juice as the stakes ratchet up for dangerous action and long runs of ever-building menace.

PLOT is a bravura example of tonal shifting that gives the auteur’s pleasant, if lightweight career finale a somewhat dangerous veneer.

The Varese Club ended last year with a bang by releasing one of Williams’ remaining grails with a sonic polish that makes this PLOT sound like it was hatched yesterday. But then, the final musical twists are two bonus tracks that firmly put Williams’ in a record era where a disco-ish main title and a six-minute jazz jam session were expected- all capped off with Williams authority, and score restorer Michael Matessino doing another great job of elucidating on Williams’ music with PLOT’s meeting of two masters of suspense.

Listen to Williams put the final touch on Hitchcock HERE