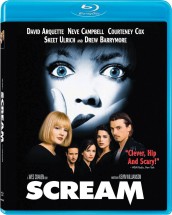 Back in 1996, the horror genre had died a horrible, violent death. The studios avoided it like the plague and terrible direct-to-DVD fodder was the only way a fan could get a fix.

Then SCREAM arrived and turned everything on its head.

Written by newcomer Kevin Williamson and directed by genre vet Wes Craven, they created a scary horror film once again  – it also poked fun at its conventions.

It was a gloriously elaborate, funny and often times scary ride that also successfully jump started the horror genre and proved to the studios that horror films could indeed, once again, make considerable cash.

The story is set in Woodsboro, an idyllic town that is still reeling from the senseless murder of the mother of high schooler Sidney (Neve Campbell). A year later, and more murders rock the town of Woodsboro, with Sidney being a prime target of the masked killer (later dubbed Ghost Face).

Suspects pile up, red herrings come fast and furious and film nerd Randy (Jamie Kennedy) spells out all the obvious rules or horror movies only to see them broken and reinvented.

Also part of the cast is David Arquette as bumbling Deputy Dewey and Courteney Cox as ambitious reporter Gale Weathers.

SCREAM kicks off with an excellent opening featuring Drew Barrymore as an unfortunate victim and it’s an expertly realized pre-title sequence that is filled with suspense and clever horror movie in-jokes. It also set up the idea that in SCREAM – anyone, even your biggest star, could be a victim.

Other things that SCREAM gets right is how much damage the victims incur on the killer too. They just don’t get stabbed, they fight back, making the killer somewhat vulnerable, but for the most part, always getting the upper hand.

The cast is super-strong, which explains why they’ve been able to keep them together for four films (SCRE4M arrives April 15).

The special features include commentary, featurettes and trailers, but it’s the High-def print that is worth owning this on Blu-ray. Craven shot the film anamorphic and like John Carpenter, utilizes every frame of the movie to create his well-orchestrated suspense sequences. It still looks damn good some fifteen years later.

While both SCREAM 2 and SCREAM 3 had a hard time living up to the original, it still completed a solid trilogy that’s now getting revisited and rebooted in the forthcoming fourth chapter. It’s definitely one of the most consistent horror franchises (okay, maybe not SCREAM 3, but who’s counting anyway) and it’s wonderful that the franchise hasn’t been destroyed by one too many sequels in the last ten years.

CLICK HERE for a review of SCREAM 2 on Blu-ray