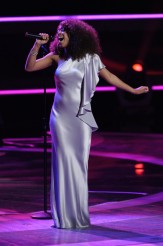 Karen Rodriguez and Haley Reinhart also in the bottom three

OK, I’m bypassing all the hour-long crapfest we had to sit through in order to get through to the results because really there is nothing that no one gives a rat’s ass about other than who got kicked off. I mean really do you care that Adam Lambert or Diddy-Dirty Money sang or that they did a Ford commercial or we saw where they were living? I know I don’t, this whole hour-long elimination should be a half hour at most anyway.

So let’s get to it right now!

Jacob Lusk, Karen Rodriguez and Stefano Langone take the stage first and Stefano and Jacob are safe, Karen goes in the bottom three and maybe I am totally wrong about the strong voting block of the Latin contingent.

Lauren Alaina, Haley Reinhart and Ashthon Jones then take the stage. Lauren is safe. But Haley and Ashthon are in the bottom three. That means Paul McDonald, Thia Megia, Pai Toscano, James Durbin, Scotty McCreery and Naima Adedapo are all safe.

But I think while the Latin contingent showed up to move Karen along, there is a bigger contingent of voters out there that are dominating IDOL. The tween chick vote. If you look at the past few years who have been the majority of people kicked off early? The chicks. Usually the ones that are attractive. And sometimes ones that are actually damn, fine singers. All three of these women in the bottom three are attractive. Why? Because the 13-year-old girls are voting for the good looking guys and not wanting these females in there to ruin their fun.

That’s fine, but when it is saving someone that should be going home because they are worse and they delivered a worse performance that’s not really fine.

Now, this is a pickle because you really can’t change the format too much obviously, this is what brought the show to the table, but I have a feeling that we will again have a male in the finals, maybe two even if some of the chicks should be there instead. But we’ll definitely see how it shakes out in the next few weeks and see if the chicks continue to get the boot regardless of how poorly the guys do.

So anyway, Ashthon got the ax and probably should have been the one to get it. Haley and Karen get another chance. But will they last next week? We’ll see.

One thing, start singing songs people know. That’s why GLEE is so damn popular. Sing song people will know and like and you will have a greater chance of getting past.

TV Review: V – Season 2 – “Unholy Alliance”
Comic-Con 2011 News: Spider-Man will not be a part of any future THE A...
MOONLIGHT: Composer Nicholas Britell gets classically serious in the d...
Movie Review: LITTLE JOE