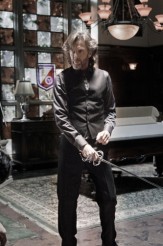 At first I thought I was watching another filler episode, one that had no bearing on what actually happens on SMALLVILLE. Parallel universes are the best way for writers to do whatever they want without fear of any real consequences. Why is that? Well, because it doesn’t matter what happens in the other universe as long as there is no crossover.

I doubt that this is needed, but just in case, spoiler alert.

Lionel Luthor (John Glover) is back. Hey, if you can’t get Lex, then his villainous dad from a parallel universe is the best way to go.

It was a nifty piece of writing, which is a kind way of saying the writers pulled one out from way deep to make this happen. Tess (Cassidy Freeman) is the surprise heir of a strange piece of Kryptonian looking crystal, bequeathed to her by Lionel. Eventually Clark (Tom Welling) gets his hands on it and accidentally activates it. The Mirror Box, as the crystal is known, transports Clark to a parallel universe.

To say that this parallel world that Clark finds himself in is vastly different would be an understatement. The biggest change is that Lionel Luthor is still alive, and it was Lionel who found Clark as an infant, not the Kents. This one change in the timeline dramatically alters the course of history. Let’s just say that SMALLVILLE weighed in pretty heavily on the nature versus nurture debate. Because of Lionel’s influence, Clark is pure evil. Murderous, scheming, backstabbing evil. 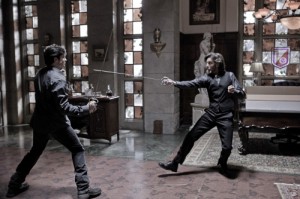 And best of all, that evil Clark got transported to our world. While watching our Clark try to navigate in a world where he’s hated is fun to watch. I thought the most entertaining aspects of the episode was watching evil Clark run amok in this universe.

Even more impressive was watching Tom Welling play the same character—Clark—yet not play him at all. Welling always delivers a solid performance, but in this case, he went beyond what I expected from him. What was great was that he was still Clark, but the subtle nuances to his performance really sold that he wasn’t at all the Clark we know.

The best moment of the episode was when our Clark is finally able to get his hands on the Mirror Box and transport himself back, only to find himself in what is left of Watchtower with Oliver (Justin Hartley), Lois (Erica Durance), and Tess standing over him, ready to take him out. Guess evil Clark really did a number on them, eh?

But I can’t write this review without discussing what Lionel’s return means to the show. Through some trickery, Lionel was also transported to our world. (Though I have to wonder if Lionel’s corpse was deposited back in the other universe. Not a fun day for the janitor.) This Lionel, however, seems like he never made that transition from Clark’s antagonist to his ally the way our dead Lionel did. You have to wonder how this Lionel will react to a Clark that is fast becoming Superman rather than the weak and evil Clark Lionel raised. But judging by his cryptic message to the newsstand owner, it seems that whatever Lionel is up to, it’s probably no good.

So a lot of developments transpired in what at first appeared to be another bottle episode. All the Luthors are back in the mix, which begs the question, is a guest appearance by Michael Rosenbaum in SMALLVILLE’s future? Yes, I know that Rosenbaum has denied any chance of return, but this is the last season and the producers as well as Welling have been begging him to return, so you never know.  And what a surprise that would be!

Until then, we have to contend with the major bombs that SMALLVILLE just dropped on us. Not bad for a filler episode. Not bad at all.