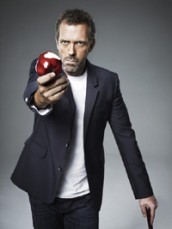 The Fox series is back on track with a great episode

Did we get our first real HOUSE episode of the season? Not to knock the season premiere, “Now What?” (which was good but hardly resembled a HOUSE episode), but “Selfish” showed us that Huddy and HOUSE can coexist and in fact make for some darn good television.

To be honest, that was what was on the line this week: whether HOUSE can truly pull this off or if, as one sharp reader put it last week, HOUSE had jumped the shark. I think after watching “Selfish”, the verdict is in, HOUSE is still one of the best shows on network television.

The writers did the smart thing and attacked the House/Cuddy (Hugh Laurie/Lisa Edelstein) thing full throttle right from the get go. Just take a look at the scene when Cuddy grabs House’s junk in front of Wilson (Robert Sean Leonard). There is no glossing over what has happened. Things aren’t going to be the same at the hospital and they don’t pretend they will be.

Well, actually, they do pretend at first, which causes some tension and self doubting on both parts. Yes, House and Cuddy were actually unsure of themselves, an unusual sight. Wilson is there to play goalie for House, as usual, while the other team members represent the gamut of attitudes House and Cuddy are bound to encounter as word of their relationship spreads through the hospital.

I appreciate that Huddy was acknowledged as a potential pitfall, but aside from the new hospital dynamics, this was very much a typical HOUSE episode. A young girl, Della (Alyson Stoner) falls victim to “surprise!” a mysterious disease. Eventually it is decided that the only way to save her is to take a piece of her brother, Hugo’s (Cody Saintgnue), lung. The only problem is, Hugo is already very ill and is not expected to live much past twenty. Donating his lung will only shorten his lifespan. Della, however, is unwilling to sacrifice her brother’s life for her own.

We have our secondary patient, 102 year old Maurice (Murray Gershenz) and his son Sydney (Allan Rich). They both feel that Murray is ill and needs a battery of tests to diagnose the problem. We find out later, though, that Maurice in fact feels fine. The true problem is father and son no longer want to live together but are not being honest with each other. They want an easy out, an “illness” that require Maurice be put in a care facility. Both covertly try to bribe House to make that recommendation.

See what’s going on here? A case of extreme selflessness propped up against another case that suffers from a lack of honesty. It’s everything House and Cuddy are now facing now that they are in a relationship together. Their inhibited attitude prevents the greater good from being served and threatens to destroy both their professional and personal lives, not to mention the lives of their patients.

House and Cuddy soon stumble upon a solution. They get into an argument about the whether Della should or shouldn’t take Hugo’s lung. Hugo overhears them and takes matters into his own hands. In one of the saddest and most touching scenes I’ve seen on HOUSE, Hugo begs his sister to take his lung. Seriously, that was a powerful and moving speech he delivered. Hugo is honest about his grim prospects and explains to his sister that saving her is the one truly great thing he can do with his life.

In typical HOUSE fashion, the entire episode comes together during the final few minutes. Della is saved, Hugo finds purpose in his life, and Maurice and Sydney are confronted by their uncomfortable feelings for each other. The lessons aren’t lost on House and Cuddy. Love, selfishness, selflessness, these are all feelings that will cloud their judgments now that they are in a relationship. But brutal honesty is the only way they can stay true to each other- and to themselves.

“Selfish” is a great way to start off to truly start the new season of HOUSE. House and Cuddy seem to have overcome a great hurdle in their relationship, but I hope resolution doesn’t come this easily for them all the time. HOUSE is built on human flaws being overshadowed by triumph and vice versa. This was a wonderful episode, but save something for the rest of the season.