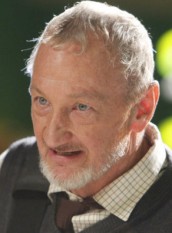 Robert Englund, aka Freddy Krueger himself, plays Dr. Stanley Wheelwright, the creator of toxin that creates waking nightmares in “Vs. The Aisle of Terror,” another great episode of the spy series CHUCK that adds a more beefed up role for Linda Hamilton as Chuck’s mom Mary and a return guest spot for Morgan Fairchild as Captain Awesome’s mom.

Let’s get back to the toxin first. Englund is a scientist who has created the toxin and wants to put it out on the open market. Mary who claims she is deep undercover as Frost, wants to meet up with Chuck so he can purchase the toxin for the C.I.A. and get it off the market.

After multiple double crosses throughout the episode, it’s clear Frost is not who she seems. Is she really deep undercover or is this all a ruse? Does she love Chuck and Ellie? Will she ever tell the truth?

What makes this episode work so well is the duplicitous nature of Mary and all the horrible things she does to her son in the name of spy work. It’s pretty brutal (and would result in some pretty intense therapy sessions for someone other than Chuck), but it really develops what a hardcore spy (or double agent) Mary is, and why she would turn her back on her family to go undercover for so long.

Keeping the episode grounded in the goofy at the Buy More is Jeff (Scott Krinsky) and Lester (Vic Sahay) who are put in charge of Halloween decorations and scaring people. This results in the “Aisle of Terror” which features an isolated room that shows such photographic images as old people, a baby in a snail costume and black licorice. Only when Wheelwright and Chuck inhale the toxin do those images really start to play head games with them.

The relationship between Casey (Adam Baldwin) and Morgan (Joshua Gomez) continues to develop (they are a really great team) and Ellie finally learns from Chuck that their mom is a spy.

Overall, a really solid episode mixing the old Buy More comedy magic with the spy stuff. I would remiss in not mentioning that CHUCK has officially been renewed for a full 22-episode season, which means this is the first time, since Season One, that the show has been given a full season run to fully explore all the nooks and crannies of the new developments of Mary, but also where Chuck’s own allegiance at being a spy might lead.

The show is back on track after some really rocky early episodes, and this new order can only strengthen the show’s direction for the rest of Season Four.