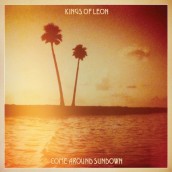 In a recent interview with SPIN Magazine, Kings of Leon frontman Caleb Followill said: “I still think there’s a song in me that will go down as one of the greats. I haven’t written it yet, not even close.”

I would disagree with that statement, since “Use Somebody” from their 2008 breakthrough album ONLY BY THE NIGHT fits that bill to a tee. It’s a perfect pop-rock ballad seething with angst riddled lyrics and a performance by Followill that will guarantee that song lives on pop radio for the next two decades.

However, I will agree that I always knew Kings of Leon had a classic album brewing inside them, and throughout their good, not great, first four releases, they almost came close on many occasions to living up to their potential and delivering on that promise.

For their fifth album in, COME AROUND SUNDOWN, it looks like the Followill brothers have finally done it.

Their first two albums felt like the alternative rock version of the Black Crowes. They were good, and unique, but things didn’t quite click. After the success of ONLY BY THE NIGHT, you can hear the Followill’s forcing themselves to broaden their horizons, expand beyond their sound and finally hit a home run.

COME AROUND SUNDOWN kicks off with the haunting soundscape of “The End” (a track most artists might have put at the end of a disc, but it’s a fitting opener) which soon segues into the band’s new hit single “Radioactive.” This is the type of track that would be a strange choice for a lead-off single from any other band, but for Kings of Leon it’s a message that they’re more than “Use Somebody” and beyond “Sex is on Fire.” This is an uplifting foot stomper that’s infectious to the core and reveals its nuances on repeated listens.

Hoping to create that “Use Somebody” vibe again, the band delivers the elegant “Pyro” with the darker than most lyrics “all the black inside me/is slowly seeping from the bone” while “The Face” captures that sad space as well with such affecting lyrics as “you had me holding on another time and place/ride out the wave/buried yourself away.”

The album takes a welcome detour with “Mary” that sounds like ‘50s styled rock filtered through an alternative band sensibility and boy does it work. This is one of the most original tracks on the entire album, something that could have been left off for a B-side, but is proudly displayed as Track 4, and continues the album’s unique musical journey.

Every song here is a winner, as Kings of Leon experiment with different styles throughout. From the faux country of “Back Down South” to the rockers that close out the album, COME AROUND SUNDOWN is an amazing record through and through.

While Caleb’s vocals really identify the Kings of Leon sound, credit to his brothers Jared on bass and Nathan on drums and cousin Matthew on guitars for pulling it all together. Matthew in particular has created a unique guitar sound all his own (he’s the Edge to Caleb’s Bono, if you want to use a U2 analogy). He really creates an atmosphere unlike any previous Kings of Leon album with his guitar work, and he also knows when to rave it up and rock it out on tracks such as “Mary.”

If record labels took a cue from RCA with Kings of Leon, there would be more potential legacy artists rising up the ranks. It was clear from their first two albums (which, frankly, were a bit uneven) that there was something special about the group. It reminded me of what Tom Petty accomplished with the Heartbreakers on their first two releases. A couple of really good tracks, but you could hear them growing, learning and wanting to do even better the next time out.  Well, we all saw how that turned out.

Kings of Leon had the similar vibe. It could have turned to dust if RCA abandoned them after their second album AHA SHAKE HEARTBEAT, but instead, they gave them time to find their voice and audience culminating with the 2008 success with both “Sex on Fire” and “Use Somebody.”

Time is so important with young groups, and there are so few of them out there that have the potential to last beyond one or two albums in a record label environment, that any time a group gets a chance it’s a blessing. It’s great RCA took a flyer on Kings of Leon, because they’ve allowed them to become one of the most refreshing and exciting new bands out there.

There are still great things to come and if Caleb Followill feels he still hasn’t written that one masterpiece song, he can at least sleep well at night knowing he created an album with COME AROUND SUNDOWN that, as far as this critic is concerned, is already one of the “greats.”