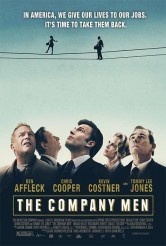 John Wells is rightly a television legend, having executive-produced and run the writers rooms for E.R., THE WEST WING and CHINA BEACH, all intelligent, articulate dramas that focus on people dealing with life and death issues.

Layoffs aren’t literally life and death in the way that emergency rooms and war zones are (though they can lead to mortality if people become suicidal), but they’re deadly serious. Wells focuses on the subject in his feature directorial debut THE COMPANY MEN, which he also wrote and produced.

His customary skills are brought to bear, which is both a good and bad thing. The dialogue is sharp and the casting is superb. However, moments that feel telling and intimate on episodic TV, where they are seeded in with weeks (or months or years) of ongoing narrative, can seem overly loaded and schematic in a feature film, where we know that whatever this is building to has got to solidify within the next two hours.

In THE COMPANY MEN, GTX corporate executive Bobby Walker (Ben Affleck) has his life upended when he is pink-slipped by his company. His mentor Phil (Chris Cooper) can’t save Bobby, as his own situation is precarious, as GTX is going through regular rounds of downsizing to remain profitable on Wall Street. Even company co-founder Gene McClary (Tommy Lee Jones), a man with decent instincts, can’t override the bottom-line-chasing zeal of his partner James Salinger (Craig T. Nelson).

Dealing with the stinging humiliation of fruitless job interviews (at least one of which he sabotages by hubris), Bobby is forced to confront downward mobility. Fortunately, his wife (Rosemarie DeWitt) has a brother (Kevin Costner) who owns a small construction company. If Bobby can get past working with a man he’s looked down on for years to make a fraction of his former pay, there may be a lifeline here.

We can see all the big ideas here, but even though COMPANY is deliberately paced, there just isn’t time to service them properly. Wells seems to be going for something universal, but realistically, most people don’t have the fallback of a relative who can provide gainful employment. This would be fine if the film was simply about Bobby’s arc, but because we’re also following Phil and Gene, everything has to be simplified to fit into the running time, with the result that we can see most of what will happen a good while before it does, and the details that we get do not shed new perspective on the situation.

Affleck works perhaps a shade too hard to make Bobby as high-handed as he is in the early sections, though he relaxes into the character once the script allows him some breathing room. Cooper, one of those can-do-no-wrong actors, embodies Phil’s rage, humiliation, pride and bewilderment all at once – we may be familiar with this sort of man, but Cooper makes him incandescent. Jones has a lot of class and common sense as Gene.

THE COMPANY MEN is well made, but it seems to resort to shorthand to cover all that it wants to address – a little less scope and a little more depth might have served it better.