Movie Review: LET ME IN 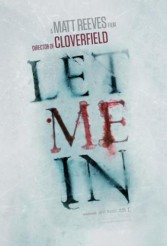 Movie Review: LET ME IN

Director/screenwriter Matt Reeves is fairly faithful to the story, characters and even environment in LET ME IN, his English-language version of the 2008 Swedish horror film LET THE RIGHT ONE IN. Seeing the original, it was very hard to imagine the movie being made in the U.S., and filmmaker Reeves has tilted one element of the story to make it creepier and ever so slightly more overt in its implication, yet it also serves to make this version just a tiny bit less challenging, as we’re pointed in a particular direction, rather than left with enormous wide-open ethical questions.

Reeves has managed to effectively swap the original’s small snow-muffled town in Sweden for a likewise winter-clad Los Alamos, New Mexico. We’re in 1983 (rather than the original’s 1982), presumably to avoid the Internet and how the digital age would affect the story and the characters. We still get the sense of run-down suburban isolation, boredom and menace that is crucial to the overall feel of both films.

LET ME IN begins with a police detective (Elias Koteas) looking into the case of a badly burned, hospitalized man (Richard Jenkins) suspected of being a Satanist, then jumps back two weeks to show us what’s led to all of this. When the film catches up to its opening, it then rolls forward in temporally normal fashion.

Owen (Kodi Smit-McPhee) is a twelve-year-old boy with an alcoholic divorced mother (Cara Buono), an absent father and schoolmates who bully and beat him mercilessly. He’s therefore very eager to befriend Abby (Chloe Grace Moretz), who appears to be Owen’s age and has just moved into the apartment next door with her adult guardian (Jenkins).

For those who have somehow missed all of the film’s publicity (including all the descriptions of it as a vampire movie) and can’t take big hints like Abby’s statement that she’s “twelve … more or less” and her habit of effortlessly walking in the snow barefoot, suffice to say that she’s really not like anyone Owen has met before. The detective is looking into the murders of several people, whose bodies have been found with their throats cut.

Both LET ME IN and the original LET THE RIGHT ONE IN are insightful about the intensity of childhood attachments, where loyalty is its own form of morality. The difference between the two films is primarily where the emphasis falls. The Swedish film is a little wilder in its outlook, whereas LET ME IN has a slightly more conventional narrative structure, which leads to a likewise slightly more conventional darkness, but they are alike enough for this to be more a matter of degree than overall approach.

Smit-McPhee (from THE ROAD) brings a sense of true innocence, yearning and sorrowing intelligence to Owen, while Moretz brings both vulnerability and the quality of a very old soul with just the right amount of calculation to Abby. Jenkins is wonderful as Abby’s weary guardian who finds himself in some outrageous situations – he and filmmaker Reeves get a lot of dark comic mileage out of a stalking situation that goes very wrong.

Not all of Reeves’ individualistic flourishes are entirely successful. Using old Ronald Reagan speeches to define the broader culture don’t fully hit home, partly because different segments of the audience will have widely different reactions to the symbolism, but mostly because Owen ignores this completely. However, Owen’s detachment from the wider world is handled with emotional truth. When you’re twelve, whether temporarily or eternally, things are different, and LET ME IN depicts this with emotional accuracy and a great deal of empathy.