Home » Exclusive Interview: THE DUKES OF HAZZARD star James Best gets animated about the 1980s cartoon spin-off THE DUKES 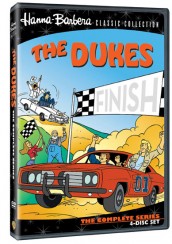 The short-lived Hanna-Barbera animated series featuring Bo, Luke, Boss and Rosco and is finally available on DVD via Warner Archives

THE DUKES OF HAZZARD was one of the most popular prime-time series on CBS in the late ‘70s and early ‘80s, but many people forget that there was a short-lived Hanna-Barbera spin-off called THE DUKES featuring the same characters, same voices, but animated instead of live action. Instead of being set in Hazzard county, the animated series followed Bo, Luke and Daisy in a race around the world with Boss Hogg and Rosco in an attempt to save their family farm. 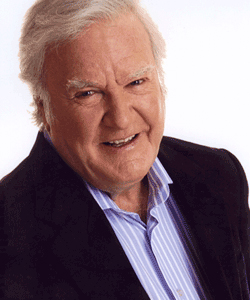 James Best, who played the dim-witted (and somewhat corrupt) Rosco P. Coltrane reprised his role with this off-shoot and now three decades later through Warner Bros. Archives, the entire 20-episode series is available on DVD (and for a limited time you can get an autographed copy by Best – CLICK HERE for more).

ASSIGNMENT X had a blast talking with James Best earlier this week in this exclusive interview as the actor talks about the animated series, the longevity of THE DUKES OF HAZZARD and how he loved playing the heavy in hundreds of westerns throughout his long career.

ASSIGNMENT X: Have you had a chance to see THE DUKES animated series recently?

JAMES BEST: I saw them when I first made them. It’s been quite some time.

AX: Is it weird looking back at the animation style?

BEST: I thought they did a very good job of capturing the flavor of the characters, but what was exciting is we used all of the original cast as the voices. There was a certain amount of legitimacy to it. 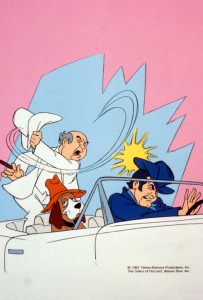 AX: It must have been refreshing to do the cartoon, since you didn’t have to get covered in mud like you did on the live action series.

BEST: It was fun sitting in a nice air-conditioned studio doing the voices over the cartoons instead of running and jumping in cars. That was exciting. Most of us did not have that kind of experience, we weren’t sure we were that capable. We found it was very simple. It was like doing it on set, but we didn’t have to do all that driving.

AX: DUKES OF HAZZARD, the live action series, was broad comedy in some spots as well. In animation, they usually want big. Was that a perfect marriage or did they want it even bigger for the cartoon too.

BEST: I think it was a little bit bigger. It was geared more for the younger audiences and they had us exaggerate a little bit – although my character of Rosco was about as exaggerated as you could possibly get.

AX: Do you have people come up to you who look back fondly on the animated series?

BEST: Most of the people I meet are older people and they talk about the live action show. Most of them were older and had grown up with the original series. They were more involved in that. The little children were fascinated with the cartoons of course. What I love about the cartoon coming out, we’re now three generations down and this is a sort of introductory thing for the younger children, so they can later appreciate the live action DUKES OF HAZZARD show.

AX: Are you surprised at the longevity of THE DUKES OF HAZZARD?

BEST: I really wasn’t, because the show had a grandfather figure, you have two handsome boys, a blonde and brunette, you have Daisy, and you have Boss Hogg and Rosco as a Laurel and Hardy comedy team. It was a good wholesome show with no naughty words and a lot of action – and you had a magic car that flew. It was pretty much covering the whole spectrum of entertainment for young people and older people too.

AX: Did you do a lot of the driving on the show?

BEST: We did a lot of the driving, but didn’t do the stunts. It was a difficult show. Even the driving out there in the desert with the dirt and the sun in the 103 degrees was tough. Plus the heat of the lights on you would burn you through your make-up. So sometimes it was very unpleasant, but other times, it was very pleasant to work at Warner Bros. on the beautiful air-conditioned soundstages. 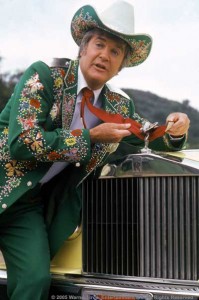 James Best in THE DUKES OF HAZZARD | ©Warner Bros.

BEST: What happened was, when I first read the script, we had done a couple of episodes and I told the producers, “I don’t want to play a crooked Sheriff.” I said, “I’ll play him like a 12-year old who likes hot pursuit, and doesn’t know he’s doing anything wrong. He’s just having a good time chasing the Duke boys.” And I started ad-libbing all over the place. The reaction, even after 25 years, is still very pleasant. I still get thousands of fan letters saying they grew up with DUKES OF HAZZARD and I hope thousands and thousands will watch the cartoon.

AX: Can you talk about working with the dog Flash in the series?

BEST: I had to threaten to quit to get the dog. They didn’t give me a girlfriend on the show, so I went to them and said, “let me have a dog.” They didn’t want to pay $500 for a trainer and I said, “the dog will become one of the biggest stars of the show, let me get a dog.” So I threatened to quit and they said, “okay, get a dog.” When we got Flash, she was seven-years old and they were ready to put her down, and she lived to be fourteen and became one of the biggest stars on the show. She had her own little dressing room that I made up. She was adorable and very smart. She would do anything for a wienie. A lot of times, I would be chasing the Duke boys, I would put a piece of wienie on the visor and she would be staring up at that thing and it looked like she was looking out at the Dukes. A piece of wienie worked miracles with Flash.

AX: You’ve done a lot of westerns throughout your impressive career.

BEST: I’ve done over 200. I did over 600 TV shows and 83 feature films before I did DUKES OF HAZZARD. A lot of people don’t know that. I got to work with Gene Autry, Hopalong Cassidy and Roy Rogers. I did five movies with Jimmy Stewart, five with Audie Murphy. I did all those BONANZA’s, RAWHIDE’s and GUNSMOKE’s and everything. And it looks like a bunch of these shows are going to be put out on the Warner Archives.

BEST: As a young person, we all wished someday we could be a cowboy. I was lucky to be under contract at Universal Studios in 1949. That’s all I did for a couple of years. After Universal, I started freelancing. I started working on all the Gene Autry series. I did LEFT-HANDED GUN with Paul Newman and of course, I did FIRE CREEK with Jimmy Stewart and SHENANDOAH and I got to work with all those wonderful people. I was really blessed. I thank the good lord every day, because this old country boy had a wonderful, wonderful career. I’m still going. We formed our own production company in North Carolina, it’s called Best Friend Films. We’re going to shoot family type films with those new Red cameras.

AX: On the westerns, did you prefer being the heroes or the villains?

BEST: When I was under contract at Universal Studios, they were grooming me to be the leading man. I said, “I don’t want to do that, I want to still be acting when I’m 80-years old and ugly.” And I’m 84 and I’m still acting. I was right about taking the parts of the heavy. At one time I was so thin, because I smoked and I went into a casting agent and said, “I’d like to play the mean guy in the show.” And he said, “you’re very thin, who would be afraid of you?” It really upset me, and I was sort of a hothead in those days so I grabbed him by the shirt and pulled him across the desk, and said “if I had a switchblade, you would be scared of me.” And he said, “you’ve got the job, you got the job.” So it caught on in Hollywood and I started jumping from one heavy to the next. I’ve been killed some twenty some odd different ways at some time. Of course, I’ve killed a lot in movies too, so that made it sort of even.

AX: You also did some TWILIGHT ZONE episodes too and they’re starting to re-release those on Blu-ray for the first time.

AX: Is there anything else you’d like to add?

BEST: I have a wonderful thing where people can reach me though Facebook and say hello and look at the stuff we got. We’re going to be selling a lot of the stuff out of the Archives and some of the movies I’ve been in. People keep complaining what’s coming out of Hollywood is mostly R-rated, what’s wonderful is the stuff that’s coming out of the Archives on Warner Bros. is PG. People will be happy to see the movies and TV shows I was fortunate enough to be in did not have to utilize nasty words to get the point across. It sounds conceited, but I would sure like people to enjoy some of the good shows that are being released for the first time in 20 or 30 years.

You can find James Best, by CLICKING HERE

You can purchase THE DUKES through Warner Archives by CLICKING HERE