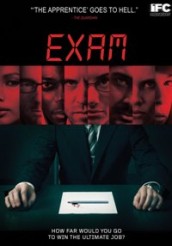 The helmer chats about how the film was made, the economic and social overtones, and much more

EXAM, available now on DVD,  is a unique sort of science fiction film. Taking place completely in one room and relying on the drama and tension to unfold, the movie has no special effects, no fancy props, yet still feels as if we are watching the ultimate job interview some time when things have gone horribly wrong in the future.

Forget THE APPRENTICE, this is the toughest job interview you’ll ever have, including getting beaten up, threatened with torture, verbally abused and, yes, even shot.

The director of the film, Stuart Hazeldine, took a few moments from his busy schedule to talk to ASSIGNMENT X about EXAM and what makes it unique.

ASSIGNMENT X: Was there any challenges to filming in just one room as in it hindered you to only having one set or was it easier because of that very thing?

STUART HAZELDINE:  It gave and it took away. On the good side, we had no unit moves to slow us down and the actors loved shooting sequentially in one space as it gave the structure of the shoot a theatrical feel. On the bad side, you quickly realize how many blushes are spared in movies by cuts in time and location. When you have no “scenes” as such, as we didn’t, and you can’t jump forward in time or go into another room you have to make every moment work seamlessly with the moment before and the moment after dramatically, and that’s actually a rather hard thing to achieve consistently.

AX: In EXAM, you paint a world that has been ravaged by a virus that continues to impact the world globally and personally among some of the characters in the film, where did the idea of combining elements of science fiction with tense drama come from? Any personal experiences that relate?

HAZELDINE: To raise the stakes and increase the desperation of the characters to get hired I needed a stick as well as a carrot for at least some of them. At the time of writing there was a lot of fear about Bird Flu doing the rounds so I started thinking that if an AIDS/H5N1-like had broken out and one biotech corporation had developed a cure – that’s a company I would really like to be working for. 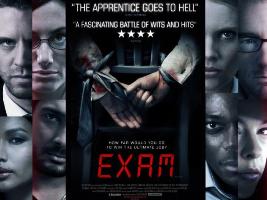 AX: What was the craziest job interview you’ve ever had and did anyone try to kill you to get it?

HAZELDINE: You know I’ve actually had very few job interviews in my life because I went straight into full-time screenwriting after college, so apart from a few Saturday jobs and working as an extra for a few years while an unsigned writer I’ve been spared the worst that corporate selection procedures have to offer – maybe EXAM is my diseased idea of what it would be like. The closest I get to it in my job is pitching, and I’ve had my fair share of blank-eyed executive stares and cold-as-a-dead-fish atmospheres to push through in my time to feel I’ve got points on the attrition board in my own way.

AX: Obviously, coming out of a recession and with so many unemployed, EXAM has modern day influences as well as those from an “in the future” perspective, have you had experiences with friends or family finding it difficult to find employment and thus helping you mold the idea for EXAM?

HAZELDINE: Definitely. When I was writing it, the crash hadn’t happened so I guess I was commenting on the need to keep morality in mind while racing ahead and trying to succeed in the corporate gold rush that was going on. Then the crash happened as we were in production, so now it looks kinda prophetic, doesn’t it? Seeing talented experienced friends unable to get work is always frustrating. There but for the grace of God go those of us who are employed…

AX: I liked how we don’t know what these people had to go through to get to the final exam, but it sounds like it was very strenuous, was that done on purpose or was it just a convenient way to get the ball rolling toward the drama?

HAZELDINE: It always helps to enlist the audience’s imagination a bit. It wasn’t important what they’d gone through exactly, just that they’d endured all different types of tests – physical, psychological, etc. – to reach the final test.

AX: Since the film takes place in one room, we have no real idea about the conditions of the world, but given the high tech nature of the room, we have to assume that things aren’t as bad in some areas. Did ever occur to you to show us what the outside world looked like or just let us leave it up to the imagination?

HAZELDINE: Well, practically we couldn’t afford to. So very quickly the modus operandi become “How can we make a feature of our limitations and make them work for us?”  Whether we achieved that is up to the individual viewer to decide, but I think we did OK in that regard.

AX: You don’t have really have anyone in the film, outside of Colin Salmon, that people in the U.S. will recognize. Is it easier or harder to work with people that may not be as high level in the acting business as it is working those that aren’t?

HAZELDINE: The only downside to working with actors who aren’t big stars is that it’s tougher to sell your film. That aside, it’s all upside I think. You don’t have big egos to manage so production is smoother, and most importantly the actors aren’t bringing the baggage of previous roles to their characters so the audience aren’t looking at a candidate saying “Hey, that’s the kid from TWILIGHT!” or whatever.  It helps me create suspension of disbelief which is the cornerstone of emotionally engaging drama, so it’s all good for me.

AX: Are we reaching a point in the job marketplace already that fighting for a job is taking almost a literal interpretation in your opinion?

HAZELDINE: Where resources are scarce – or perceived to be scarce – fighting will often erupt. That’s why wars get started. That explains 90 percent of human history right there. So when times are tough people will fight for jobs, homes, food, etc. It wouldn’t surprise me in this job market if there’s some real skullduggery going on out there.

AX: What was it like working with a distributor such as IFC? Were they excited in what you had to offer or ask you to change anything and make it appeal to a U.S. audience?

HAZELDINE: They’ve been great. They got it very quickly and came in before we won Santa Barbara, before my BAFTA nomination. It fit their model, which is a model I like, and they don’t release many titles on DVD, but they’ve released us – so I’ve had a great experience with them.

AX: This was your first time directing a film, at least according to IMDB, how was the experience?

HAZELDINE: The directing part was great. As cool as I’d always hoped it would be, and not as tiring as I was worried it might be. But I was producing and financing too, so it was quite stressful at times because I was also running an eye over the bills and schedule a lot. I had a great producing partner, though: Gareth Unwin who just produced THE KING’S SPEECH, and he kept my head above water.

AX: The film is very well done and unique, I would think that this will have opened the door for you to do more directing gigs in the future if you want? Has anyone come calling yet?

HAZELDINE: A few have, yeah. I think producers in the States will only really start to see it with this DVD release so we’ll see who likes it. L.A. trusts new talent more than London does – look at Rupert Wyatt going from THE ESCAPIST to RISE OF THE APES – so I’m optimistic I’ll get more jobs from EXAM.

AX: So what’s next for you? Can you explain your future projects?

HAZELDINE: At present I’m co-writing a film about Moses for Warners – no small endeavor – and tweaking a script I’d like to direct in New York next year: a supernatural detective thriller, so we’ll see if I can set that up soon. Hope so.