Exclusive Interview: Chi McBride has a HUMAN TARGET on his back 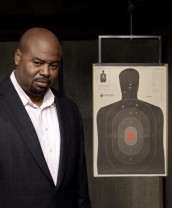