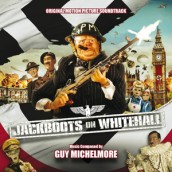 Puppet music gets to blow things up again

As composer Barry Gray showed with THE THUNDERBIRDS, puppets are far more believable when the composer is playing them for real, especially with music that doesn’t have any strings attached to imbuing the marionettes and their miniature settings with epic heroism.

Now with his music for the WW2 spoof JACKBOOTS ON WHITEHALL, Guy Michelmore delivers what’s probably the coolest music to grace marionettes since the days of Team Tracy. As the band of puppet brothers go against the Nazi troops who’ve invaded England, JACKBOOTS summons an explosive spirit in line with TEAM AMERICA, But where Harry Gregson-Williams did a great job of delivering the kind of innocuous action rhythms of the Jerry Bruckheimer pictures that film was spoofing, JACKBOOTS’ premise draws on the richer thematic tradition of classic war scores by Elmer Bernstein, William Walton and Roy Budd.

Leave it to Michelmore to make a big leap from the animated action of Marvel cartoons like DOCTOR STRANGE and PLANET HULK to capturing the stirring patriotism of THE GREAT ESCAPE, THE BATTLE OF BRITAIN and THE DAM BUSTERS here, as Britain’s fighting spirit joins with the bagpipes of Scotland, along with such witty contemporary vibes as a rock guitar version of “Deutschland uber alles.” But for the most part, Michelmore plays JACKBOOTS for straight-laced derring-do, complete with the drums, fifes and sweeping orchestrations you’d get for any human fighting Der Fuhrer.

From the score’s rousing start to finish, JACKBOOTS draws bright, valorous emotion on warriors whose emoting is otherwise limited by Styrofoam. Non-marionette actors should be this musically lucky.