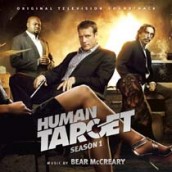 Bear McCreary continues to prove himself as the hardest-working composer on television, whose sound gets bigger and better with each show, none more spectacularly than with the ripping symphonic style he’s given to Fox’s spin on DC comics’ HUMAN TARGET.

Though he’s composed the pokey country experiments of EUREKA, the sci-fi mythos of GALACTICA and CAPRICA and the chilling apocalypses of THE SARAH CONNOR CHRONICLES and THE WALKING DEAD, there always seemed to be a superhero waiting to break free from Bear McCreary. And while TARGET’s danger-seeking impersonator might not have any powers beyond being extra crafty, McCreary’s adventurous scoring is truly ripped, taking on the sweeping, melodic brawn usually heard in the bigscreen approaches of such musical adventurers as John Williams and David Newman. Like them, McCreary knows how to write a sweeping theme to tie the action together. And the engaging, Emmy-nominated motif he’s composed for HUMAN TARGET is omnipresent through this first season, with a live orchestral sound that’s a rarity for the medium.

There’s enormous stylistic dexterity as well in TARGET’s turns, whether the music is in the mode of Indiana Jones, going to tropical percussion, being techno cool, tangoing or having just a bit of relaxed silliness. It’s the stuff that playful good guys are made of, and a welcome lack of the dramatic tsuris that McCreary usually deals with. That makes TARGET particularly liberating for an obviously enthusiastic McCreary, who delivers his most purely enjoyable work here.

La La Land collects McCreary’s greatest TARGET hits into an oversized CD pack containing three discs and nearly three hours of music, all of which is consistently engaging, not to mention melodically cohesive. It’s a listen whose excitement makes the listening time fly by, one again proving this Young Turk has the stuff to take on any big screen comic adaptation, let alone a hero in the mode of Christopher Chance.