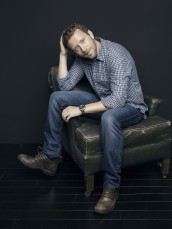 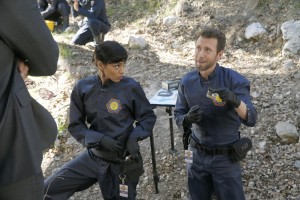 BONES is heading toward the end of its tenth season Thursdays at 8 PM, but never fear. The series, developed by Hart Hanson from Kathy Reichs’ novels with Emily Deschanel as forensic anthropologist Dr. Temperance “Bones” Brennan and David Boreanaz as her husband, FBI Special Agent Seeley Booth, will be back for Season 11.

TJ Thyne, who has been on BONES since the beginning as crime-solving entomologist Dr. Jack Hodgins, has seen his character go from rich single man to broke but absolutely happy married husband of lab artist/tech genius Angela (Michaela Conlin) and father of a little boy.

When Fox and FX Networks throw a party for their various series and the Television Critics Association, Thyne is delighted to spot cast members from one of his other favorite dramas, which will also be coming back next year.

TJ THYNE: I just saw Noah [Emmerich]. I was hoping the rest of the cast of THE AMERICANS was going to be here, because I’m so obsessed with that show. How good is Matthew Rhys? And Keri Russell. They’re so good.

AX: Well, it’s on FX, which is Fox’s sister network. Maybe you can guest on THE AMERICANS as a Russian spy. Can you do a Russian accent?

THYNE: I can start working on it tonight after you and I finish talking [laughs]. How cool would that be? That would be so neat. I would love that. I would do that in a second.

AX: In BONES’ two-hundredth episode, which aired in December, it was done as a sort of mini-Hitchcock thriller, with all of the regular cast playing different characters in the 1950s. David Boreanaz directed from a script by your exec producer Stephen Nathan. Instead of Hodgins, you played a Fifties paleontologist. How was it working on that episode?

THYNE: Well, we kept going back and forth. The tone of that episode was a big question mark for so many of us for so long. How broad were we going to go, how far could we go with it, or how subtle did we have to be? So it was great. David and Stephen Nathan did an excellent job of letting us know and pulling it in. So there was a lot of research, a lot of movies watched, but in the end, we just tried to find something broad enough that it’s fun, but not so much that it’s slapstick.

AX: Were there any particular people or actors you based your performance on?

THYNE: No, I really just took the same basic characteristics and qualities of Hodgins, and thought, if he really did exist then and was just as ecstatic about dinosaurs as he is about entomology …

AX: You did a little bit of an accent for the character …

THYNE: Fun, lots of fun. As an actor, that’s always one of the most enjoyable things – creating the hair, the wardrobe, the real look of it, so that was lots of fun.

AX: Did they make a dinosaur skeleton for the episode, or did the production borrow one for your character’s laboratory?

THYNE: That was borrowed. I don’t know where they got it, but it was beautiful. The whole set looked like a museum. It was a beautiful set – the design and everything about that episode. I sat and watched it with my mom and dad, and I got swept up in it while I was watching it. It really did feel like a film from the Fifties. It was really fun and playful and I loved the look of it. It was amazing.

AX: Do you look forward to when David Boreanaz is going to direct an episode?

THYNE: Always. We always have. Ever since he directed us the first time, he’s such an actor’s director, he speaks the language, and he knows our characters inside and out. So there’s a shorthand that we have with David, where it doesn’t take a lot of time, there’s an understanding – a lot of times, he doesn’t even have to say much. It’s a look and it’s a subtle note that you just take, and we love it. It’s really fun. I think it’s amazing that he can jump back and forth and back and forth so easily. He does such a great job at it. I hope he directs more and more [as] we continue.

AX: Do you want to direct?

AX: With Emily Deschanel’s real-life pregnancy being written into the show, it looks like Hodgins and Angela probably won’t be having another baby this season.

THYNE: I think they’re probably going to be very happy being an aunt and uncle yet again [laughs].

AX: How do you feel about John Francis Daley, who played Dr. Lance Sweets, leaving the show and John Boyd coming in as new regular FBI Special Agent James Aubrey?

THYNE: I see it like we lost a very dear friend, a friend in the lab and in real life, and not having John Francis with us every day is really sad to me, to this day. Even here at the party – I mean, I’m usually sitting in a corner somewhere, cracking up with him. So we miss him. I miss him, the fans miss him. [Daley has] certainly not stopped since he’s left BONES. I mean, he’s been on fire [as a writer/director], and I’m so proud of him, I really am. I have a smile from ear to ear every time I see his name and face pop up on amazing interviews and articles and awards and announcements and I’m really excited for him. I’ll be the first person in line for his first film that he releases as a director.

I think John Boyd brings this great new energy in a really fun, very quickly and perfectly developed character of Aubrey. I think he’s a lot of fun. I’m actually looking forward to being able to act more with him. Stephen [Nathan] did a rewrite on a scene between Aubrey and Hodgins where we get to go out in the field together, and I’m so excited about that stuff, getting to establish that relationship.

To me, [Daley and Boyd] are two completely different individuals and people in real life and the characters. But they’re both such lovely human beings that I just wish that they could have been on more episodes together, because they would have complimented each other so much, their characters.

AX: You’re working on writing a new script. Are you working on anything else?

THYNE: No. I gave in many seasons ago with BONES that you have to focus all your attention – nine months of your life is dedicated to this character and I kind of want to be there full-time. With everything that’s going on, with John leaving and John coming and Em is pregnant and the two-hundredth episode, you want to give all your focus to the show so that you can be really there. I’m one of those people, I don’t want to get myself sidetracked. Having said that, summer’s coming up, so it will be interesting to see if I can jump into a few projects [during hiatus].

THYNE: I love the show and I hope it continues.