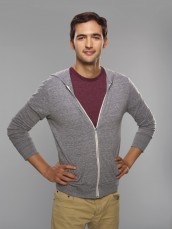 The host of the National Geographic show talks human perception, attraction and more 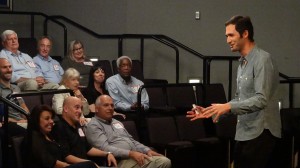 BRAIN GAMES, National Geographic’s Emmy-nominated series that challenges audience members to play games of thought and perception, is now in its second season Monday nights at 9:30 PM. On February 10, there’s a special Valentine’s Day episode that deals with human attraction.

At a National Geographic party thrown for the Television Critics Association, BRAIN GAMES host Jason Silva is available to sit down and talk about what draws people to one another, and much more.

AX: What can you tell us about the episode on attraction?

JASON SILVA: We play a lot of games showing what you’re attracted to is actually written into your DNA in a way. We showcase how the Golden Ratio and symmetry and all these other non-emotional variables play into attraction. We have these romantic ideas about attraction that in the real world aren’t true.

AX: What else can you tease for this season?

SILVA: We have an episode on competition – we highlight the disposition that humans have towards competition, why that has been selected for over time, because that’s a good survival skill, to be competitive, to be on your toes. We have an episode on age – a lot of people think the brain deteriorates over time. We show you all the ways that it gets better over time as well. There are a lot of fun episodes, a lot of fun topics. Risk, trust, all these are things we’re looking at.

AX: What did you learn in Season 1 that you’re applying to Season 2?

SILVA: Just keeping the participatory, interactive component of the show alive. I think people really learn by doing, and I think that the game has really awakened a kind of engagement in the audience that is awesome, and that has resulted in it being the highest-rated series ever for Nat Geo. So we’re bringing a lot more of that – a lot more games, a lot more interactivity and a lot more knowledge.

AX: When in your life did you realize that being intelligent could in itself be a career?

SILVA: [laughs] Well, my mother teaches high school English, and she’s an artist and a poet and a sculptor, she’s published twelve poetry books. I grew up in a household inVenezuela with living, breathing art installations that were the way that she used to express herself, a highly creative environment where ideas were celebrated, where artistic expression was celebrated. My mom always used to tell me, “Do what you love and be kind.” Seeing her as somebody who was always able to have a creative output – if she felt sad, she wrote a poem, if she felt happy, she made a sculpture – I think for me, there was an early interest in finding outlets for my passions, and I discovered video at a very early age, and so my love was ideas and video.

I thought what I wanted my career to be was, I wanted to create contexts in which I could philosophize out loud. I used to host these salons inVenezuela, where I grew up, with my high school friends – we were inspired by Charles Baudelaire’s gatherings inFranceback in the day with all the astronomers and the artists getting together and drinking wine and talking about ideas. There’s such a richness to just thinking out loud and talking out loud. Waxing rhapsodic is an art form in itself and I always loved it, and so I studied film and philosophy in college. I had no idea what I was going to do. I went to theUniversityofMiami, and there was nothing practical about my choices; they were just a reflection of what I love. I love ideas and ruminations, so I studied philosophy. And I love content – media, films – because they help us internalize fleeting impermanent moments. The camera is my means to internalize those fleeting epiphanies that I was having in my life. And then I ended up getting a job working for Al Gore’s TV network Current, where I hosted a show for five years, and they hired me because of a short documentary that I made. In a way, Current was paying me to be an omnipresent VJ and talk about short-form content and citizen journalism and user-generated content and to give a voice to the voiceless. So I guess I just grew up in an environment in which free thinking and doing what you love was encouraged.

AX: Do you collaborate on the content for BRAIN GAMES and how did you come to be its host?

SILVA: It’s definitely a collaborative process. The executive producer Vincent Rubino spent months in preproduction, doing all this research. The original series was very successful – it wasn’t a series, it was a special, three specials, and they did really well. And so they decided to adjust it and turn it into this thirty-minute episodic series. They were looking for a host, because they thought it would be great to have a curious navigator guy. They didn’t want it to be one-hundred-percent a scientist, and they didn’t want it to be just like a TV personality that wasn’t interested in the subject matter.

It worked for me because I had left Current TV and I was creating a series of short, noncommercial documentaries, three-minute micro-documentaries, that explored the co-evolution of humans and technology, which I was always fascinated by, the way technology extends our reach and our vision in the films. It had a lot of viral buzz, but totally noncommercial. They were just for educational purposes, but they gave me a sort of voice that kind of had an impact out there, and so Vinnie brought me on board and we had a bunch of meetings about the subject matter and about the brand, and I told them how passionate I was and how curious I was, and since then, it’s just been a wonderfully collaborative process and it’s just great. We have all these experts who help us design the experiments, like neuroscientists and behavioral specialists.

AX: How much of what you’re discussing in the show are ideas that have interested you that you haven’t had either the forum or the finances to explore before, and how much is stuff that National Geographic and the producers want you to discuss? 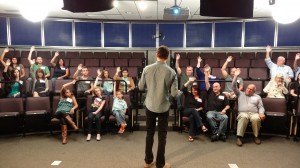 SILVA: They’ve been so supportive of me as this unique voice. You go out there and they’re so kind. They’re trying to empower me to bring my own take on things, because I’m insatiably curious, but I also have a lot of opinions on a lot of crazy, wonderful, big ideas, and I think it’s this wonderful marriage between this very successful brand and the wonderful support of Nat Geo and then me bringing my own unique voice, and I think that works really well. It has so far.

AX: In terms of technology, you talk about some relatable things, like how the iPhone is different from a regular phone …

SILVA: What’s interesting about the iPhone versus a regular telephone, which is wireless, versus a regular cell phone, is the sheer amount of different things that it can do. It’s more like a magic wand than a phone. Alistair Crowley used to define magic as anything in which you can exercise your will in the world through the use of your mind. So what’s the magical way of opening or closing that door? Well, to will your body to stand up and close or open that door, that’s magic. With the iPhone, it’s like you put your intent into it, and it helps you exercise that intent in the world. When I send an email on my iPhone, I’m sending my thoughts to somebody else and telling them to do an action that causes some kind of a change in the world. So it’s like we’re creatures that our minds create change in the physical environment all the time. These tools are just augmenting that.

AX: Have there been any things that have stumped you or astonished you in the process of making BRAIN GAMES?

SILVA: Oh, yeah, definitely. I mean, even some of the so-called simple illusions blow my mind. Like that Einstein mask, where you’re staring at the back, hollow side of the mask, and yet your brain is compensating for a concave face which it doesn’t understand and it’s creating a faux protrusion, and you think that you’re looking at the front when you’re really not, it’s unbelievable. You know you’re being lied to, but your brain in real time is making you hallucinate.  So that was fantastic.

AX: What was your reaction to the Emmy nomination for BRAIN GAMES?

SILVA: [laughs] Pinch me. I thought it was like a dream. It was a new category, Outstanding Informational Series or Special. It was kind of amazing that they created a new category and they included us in it. We were competing against an amazing couple of shows there. So it was nice to be in such good company.

AX: Did you learn anything from that that you could make into a game?

SILVA: You know, it was about managing anxiety – I guess you could create a game out of that, sitting there, wondering if you’re going to win for like five hours and then, finally, you don’t [laughs] and how do you deal with that. We were just happy to be in such good company, but definitely, there was anxiety beforehand.

AX: Do people recognize you more from BRAIN GAMES or from your work on the Internet?

SILVA: “Existential Bummer.” Two-and-a-half million views. It’s about impermanence. How do we deal with impermanence, how do human beings deal with entropy, with the passage of time? It’s very philosophical and existential – my cup of tea.

SILVA: Three minutes. I love making those videos as well. I’ve gotten to make some interesting friends because of it. I became friends with Ron Howard – he loves my videos as well, so it’s been pretty cool. Brian Grazer as well – I might be doing something with him as well. We talked about a shared love of ideas and finding interesting ways to tell cool stories. I’m a fan.

SILVA: Yes. I have a series on AOL called THE FUTURE OF US, sponsored by Chevrolet. It’s part of AOL’s new original series, and I also have a YouTube series called SHOTS OF AWE, which is my most popular YouTube series. So those are my two Web projects, and then BRAIN GAMES is my TV show.

AX: Is THE STORY OF US about human evolution?

SILVA: Exactly. Futurism, singularity, immortality, computers. It’s a series of interviews where I kind of wax poetic and it’s artfully visually animated. So it feels kind of like an art film. Check it out.

AX: Is there anything else you’d like us to know about this season of BRAIN GAMES?

SILVA: Stick around. It’s going to be tumbling down the rabbit hole every single episode.