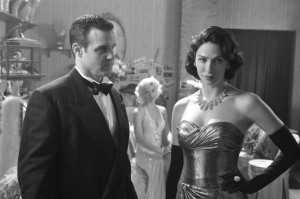 Syfy’s WAREHOUSE 13 returns for the second half of its fourth season tonight, Monday April 29 at 10 PM. In Part 2 of our exclusive interview with WAREHOUSE 13 stars Eddie McClintock, who plays Pete Lattimer, and Joanne Kelly, who plays Myka Bering, the actors talk about whether their characters will/should become romantically involved, physical challenges on the job and more.

ASSIGNMENT X: As far as the Pete/Myka relationship, do you think the characters will hook up romantically?

JOANNE KELLY: I don’t now. I expected it to happen, and then Jaime Murray [as H.G. Wells] happened, so God knows what’s going to happen in this show.

EDDIE McCLINTOCK: [Executive producer/show runner] Jack [Kenny] and I were talking about it in an interview the other day, and he said, “The way we may deal with it, everybody’s sitting around the B and B and all of a sudden, Claudia [another Warehouse agent played by Alison Scagliotti] looks over at Myka and goes, ‘You slept with him. Oh, my God, you slept with him.’ And Myka’s like, ‘No, I didn’t. What are you talking about?’ And then she maybe smiles or whatever.

KELLY: It will never become the focus of the show.

McCLINTOCK: Yeah. We don’t ever necessarily need to see them.

KELLY: Also, I really love the idea that you can flesh out and explore two characters, a man and a woman, without necessarily having them together. It doesn’t really happen a lot in television in the end, especially for women, because so often, [as women] we’re peripheral. We’re a girlfriend or a wife, not a character unto our own. And I think if [Myka] had jumped into bed with [Pete] in Season 1, it would have made [Myka] a lot less interesting than the way that we’ve developed her in the last five years. I think even when people are having sexual relationships with each other, they still either love each other or don’t really care for one another. Sex doesn’t have to be between two people who love each other [laughs] and it doesn’t have to be between two people who don’t. 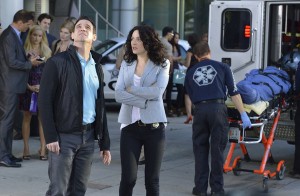 KELLY: [laughs] That’s what Mom told me. But I really like the idea that we’ve explored with Jeri Ryan as Pete’s ex-wife – he’s had this whole life and he’s a full human unto himself without [Myka]. And it’s really interesting that we get to be partners, but that doesn’t have to be a key point.

AX: As far as Myka’s back story, were you surprised to find out that Myka had a sister?

KELLY: Oh. Surprised? I think I knew that there was a sister, like way back when we did an episode with my parents in Season 2, I say that [Myka’s father] never had a boy. That’s why I was so tough, such a tomboy, but I never addressed it and I think that there was talk of a sister. I know we talk about [Pete’s] sister who’s deaf who we’ve never met, so that’s a place we can still go. There’s lots of stuff we can explore.

AX: Did you enjoy playing the sibling relationship with Amy Acker?

KELLY: Yeah. And also, how do you have a fight with your sister who’s pregnant while she’s being possessed by evil? It’s one of the many questions asked by WAREHOUSE 13, which I had to have a really good think about [laughs].

AX: Do you have a favorite or most challenging physical thing you’ve had to do in the course of your Secret Service work?

KELLY: I got hurt a couple years ago – I displaced a couple ribs and a collarbone. I think it was during a stunt – I never really figured it out. I clotheslined some guy at four o’clock in the morning and the next day I couldn’t move and I’ve been having back problems ever since. That was probably one of those things. I got on the [flying] wire with Jaime …

McCLINTOCK: The [flyling] harnesses for me are always dicey, because –

KELLY: [laughs] Thank God you don’t want to have any more kids.

McCLINTOCK: I call it the Emasculator, because [laughs] things are not supposed to be that compact.

AX: So part of the harness goes between your legs to support you in the air?

AX: Show runner Jack Kenny has said that he talked to the WAREHOUSE 13 cast about real-life abilities – playing guitar and so on. Is there anything on the show that’s from your real lives?

KELLY: I got to have my teddy bear on the show that I’ve had, that my Mom got at my shower. I worked it into a scene. That was pretty special.

McCLINTOCK: I think Jack mentioned to you that I’m twelve years sober, and I’ll be thirteen. I have the same sobriety date [as Pete]. Also, I wanted Pete to be an ex-Marine, or at least ex-military in some way. so that was just my little way of saying thank you. I love comic books and Pete loves comic books, so the line between Pete and myself is pretty blurry.

AX: Are you allowed or encouraged to suggest dialogue or situations?

McCLINTOCK: Yeah. If you have an idea, Jack’s very open. I usually will put buttons on scenes. I wouldn’t necessarily add dialogue to the middle of a scene, because the other actor is like, “What? Where’d that come from? Why would you do that?” But a button they can always edit out. By “a button,” I mean, it’s the end of the scene, so they can just cut it off. But Jack is very fair and very open to suggestions.

KELLY: Yeah. And he tells us when to shut it down. It’s quite an honest set, too, and that’s why I really like working with all these guys. They’ll be like, “Yeah! Yeah! No, we’re going to stop right there.” Everybody’s kind of on the same page. If there’s an idea that’s worth being put forward, if the whole group doesn’t agree on it, it pretty much dies.

It doesn’t happen very often, but I think if somebody feels strongly enough about something or there’s an idea that one of us feels – sometimes [McClintock will] look at me and he’ll want to do a bit and I’ll just be like, “No.” “Why?” “Because I don’t like it.” And then he’ll do it anyway. And that’s cool. If you feel that strongly about it, do it. It’s not going to destroy a relationship at this point.

KELLY: Yeah, and he’ll play with you to come up with something that makes you feel, “Oh …”

AX: In doing WAREHOUSE 13, have either of you learned anything new?

KELLY: I’ve learned so much – I’ve changed so much as a person since I started doing this show and growing up –

McCLINTOCK: She has. She really has come together.

McCLINTOCK: Yeah. The thing about the show is, you can actually learn something. You can learn about artifacts. There’s always a kernel of truth in the stories. I think that’s cool. I’ve talked to people who are like, “Oh, we use your show in our film studies or our history class for grade-school kids.” And that’s cool, to be a part of that.

KELLY: All the literary references – they do a really good job of really making it a family show, and I think that’s one of the strengths that WAREHOUSE 13 brings to the table, is that everyone can kind of sit around the TV and learn something new.

KELLY: Aren’t we all? Isn’t that how we are in real life? We’re a different person to our moms than we are to our bosses than we are to our friends, of course. I think Myka’s relationship with Pete is explored on the show, she’s with him all the time and you see the relationship between us here. It’s a quite deep river, that. And with the other characters, they’re still sussing each other out. But I think Pete and Myka don’t suss anymore. All the sussing is done. I always miss [McClintock] a little bit when I’m not [teamed with him – being paired with other characters] is always interesting, but for me, the real magic happens with this one.

McCLINTOCK: But of course –

KELLY: Aaron Ashmore is the nicest, sweetest guy in the world, literally. [Playing off the other Warehouse personnel] always keeps it fresh, keeps it new. And you can explore different aspects of your relationship with each of those. Claudia and I have a little big sister, little sister, that’s kind of changed as she’s gotten older since she’s been on the show, become more of an adult.

McCLINTOCK: I really love working with Saul [Rubinek], too. He’s the grand poobah, he’s the top dog. I like to just sit and listen to him tell stories.

KELLY: Also, Saul’s one of those actors who can do anything. He really can. To watch him work is quite memorable.

AX: Have you done the convention circuit?

KELLY: I did Comic-Con and I’ve done one other. He does it a lot.

McCLINTOCK: I love it.  I love going there, I love meeting the people who have given me an opportunity to have a career in this business. I think I see myself basically as the WAREHOUSE 13 mayor. It’s my job to go out and shake hands and kiss babies. And that’s what I do at the conventions. I think that it makes people walk away going, “We’re doing the right thing by watching this show, because he seems like a pretty good guy, and I think I’ll tell my friends.” I want the show to go on and on and on, so the more I can get the word out there, the better it is for all of us.

AX: Do you guys have any other projects coming up that we should know about?

KELLY: I have a film called KENTUCKY that I’m still waiting to see – it’s not finished yet.

AX: Is there anything else you would like to say about WAREHOUSE 13?

McCLINTOCK: It’s on Syfy.com right now if you want to go and watch the season 4.5 premiere, but if you do that, you’ve got to please promise to watch it live. Because of the all-important numbers. It’s interesting, because people will say, “Oh, yeah, Syfy is going to cancel another good show.” If you show up and you watch, they’re not going to cancel the show. The reason shows get canceled is because their numbers don’t validate the production costs. So you show up, you like the show, watch the show live, and that’s the best support that we could possibly get.