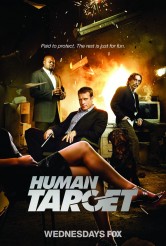 During the press event for HUMAN TARGET at WonderCon 2011 held in San Francisco, executive producer, Matthew Miller, commented on the possibility of a third season of the action show on Fox.

“You want to be able to say we got picked up,” Miller says. “Unfortunately, we don’t know either way. I think that for Fox it’s going to be about how their pilots turn out certainly. I think there will also be some license fee negotiations and things of that nature. We won’t know anything until May.”

Does Fox still support the show?

“As far as I know, Warner Bros and Fox have been incredibly supportive of the show,” Miller says. “I honestly think that it isn’t a ‘no’ and they aren’t telling us. I think they genuinely do not know which way it is going to go. We are hoping.”

So it doesn’t matter then how the ratings for the show were but more about the new pilots?

“HUMAN TARGET has already done its run, so it is not going to affect anything,” Miller says. “So if it was based purely on us, they would have had an answer by now. The reality is we premiered to not a great number when we aired in November. Then we had Thanksgiving the next week, then we had Christmas. So we had a really rough start. Since coming back in January, every single week we went up. They moved us from Wednesday, then we were on Friday, then we had two weeks off, then we had Monday and that was our best ratings of the season. Then we had post-[AMERICAN] IDOL, which obviously you do better post-IDOL, everyone does. So that’s a little inflated, but the preceding four weeks were really helpful to us.”