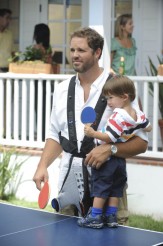 The actor talks his new Fox comedy, plus THE OFFICE and ANGEL 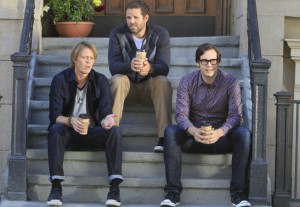 Fox’s Tuesday night 9:30 PM comedy TRAFFIC LIGHT deals with a group of five friends at different stages in their relationships. Mike (David Denman) and Lisa (Liza Lapira) are married to each other, Adam (Nelson Franklin) and Callie (Aya Cash) are involved with one another and Ethan (Kris Marshall) is the player of the group.

In this exclusive interview, California native Denman, who has been on the big screen in films including Tim Burton’s BIG FISH, talks about his new gig and a few notable previous TV jobs.

ASSIGNMENT X: How many seasons did you play Roy Anderson on THE OFFICE?

AX: Can you talk about the difference between being part of an ensemble as large as the one in THE OFFICE and the ensemble in TRAFFIC LIGHT, which at least initially is a lot more contained?

DENMAN: Our [TRAFFIC LIGHT] ensemble right now is basically five of us and it is a different experience. I was one of fourteen or fifteen main characters, I think, on THE OFFICE, and it’s hard when you’re doing a show like that to find time for anybody to have their moments. In this, you can really focus on the main five characters and they have a lot more story. As an actor, creatively, there’s a lot more to play and a lot more to do, which is a lot of fun. But it’s still – the camaraderie and ensemble work is still very similar to THE OFFICE, because we do a lot of improvisation on our show, as well as we did on THE OFFICE.

AX: Is TRAFFIC LIGHT the first time you’ve been the lead in a series?

DENMAN: Yes and no. I’ve done ten pilots, and I’ve played the lead in many other pilots, but none of them made it to the air. So this is the first time – I’m not “the lead,” I really do believe it is an ensemble. I’m one of five people. I’m grateful, honestly, that I’ve got to have the show not solely on my shoulders. It’s really an ensemble effort, and honestly, they are one of the most talented ensembles I’ve ever worked with. Honestly, they’re just as funny if not funnier than THE OFFICE crew and on any other show that I’ve worked on. This is an outstanding group of actors, so I’m grateful to be part of that ensemble. 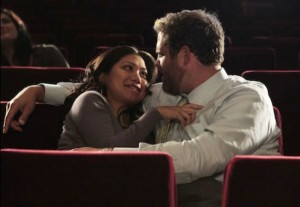 AX: She is very petite and you are very tall. Do you play with the height difference in the comedy?

DENMAN: Honestly, Liza Lapira’s five-foot-two, but she has such spunk and such fire in her, she comes across as a six-foot-five animal. So she puts me in my place every second of every day when it comes to the dynamics [in] our relationship. It’s never really been an issue, it’s never really been addressed. The other couple addresses it a little bit more than we do, but maybe that’s because Nelson is six-five and I’m only six-four, so …

AX: Is that ever an issue as far as framing the shots so both your faces can be seen?

DENMAN: It is, actually. A lot of this show is done in wide angles, to be quite honest, because our comedy works best, sort of, in the bigger angles, bigger shots, so yeah, it does create a little bit of an issue for our d.p.s [directors of photography], but they are so good, they don’t make it an issue, because it just is the logistics of our show. I will say, when Liza auditioned, I was very adamant about sitting down on a chair, or squatting down on my legs, so she didn’t look as short as she did next to me on camera when we first did the test screenings, because she’s so great and so talented that I really wanted her to get the job and I’m so grateful they hired her.

AX: Is your TRAFFIC LIGHT character Mike the most stable within the group of friends in all ways, or is he faithful to his wife but quirky in other ways?

DENMAN: He’s got his own neuroses. He’s a bit high-strung about the details and when [his friends] look to give him a hard time about stuff, because he definitely has a black-and-white feeling of how things are supposed to be and how things are done. When they mess with that and they push those boundaries, it creates a lot of comedy.

AX: Do you have any relationship-comedy heroes, like Jackie Gleason in THE HONEYMOONERS, for example?

DENMAN: Oh, I love THE HONEYMOONERS, but no, I mean, I’m not necessarily a fan of particular comedians. I’m more fans of particular movies or TV series, stuff like that. I’m a huge fan of Steve Carell, I think he’s just a genius, and I was so grateful to get to work with him every day [on THE OFFICE], but I don’t necessarily have that perspective. I like so many different comedians.

AX: One of your more unusual recurring roles in the past was playing Skip on ANGEL …

DENMAN: I did. I did four episodes as a demon, wearing lots of prosthetics. I had a good time on that show.

AX: Skip wound up having quite a character arc. Did you know what that was going to be?

DENMAN: No, actually, that started off as a one-episode deal and it was such a fan favorite that they decided to bring me back. That was the first time I’ve ever experienced something like that Only in that world of Joss Whedon can you create a character like that, a demon who’s like, “Hey, what’s happenin’?”, so nonchalant. I had a great time doing that. I didn’t have fun getting in and out of the makeup, but I had a great time working with those people.

AX: Have you done any roles that have called for heavy prosthetics since then?

DENMAN: No. No, and I don’t plan on it, to be quite honest. It was my one and only prosthetics show, I hope. I don’t know. You never know.

DENMAN: It’s a real show about real life and it’s really funny and hopefully people will tune in. The show does get better every week. It’s the nature of a new series that it does get better as the chemistry grows between the cast, and the writers try to write more to the strengths of the actors, and that is no different with our show.